Bordered by the affluent residential neighbourhoods of Shepherds Bush to the north, Kensington to the east, Chiswick to the west and Fulham to the south, the riverside district of Hammersmith is popular with young professionals, commuters and families due to its enviable transport links, good schools and wide selection of residential homes.

Hammersmith is West London’s buzzy, multicultural hub that enjoys an enviable position as gateway to the A4 – one of the main arterial routes out of London. Head west on the A4 and onto the M4 and Heathrow Airport, Reading, Bristol and South Wales are all in easy reach, while the A4, which heads west to the M4 towards Heathrow Airport, Reading, Bristol and South Wales, while head east and the route provides one of the fastest road routes into central London.

Situated just five miles west of Charing Cross on the north bank of the River Thames, Hammersmith is also a major public transport hub. In the heart of the Hammersmith roundabout gyratory system, Hammersmith Broadway houses a main bus station as well as one of the two Hammersmith Tube stations. From here, passengers have access to the District and the Piccadilly lines, while just north of the roundabout is the western terminal for the Hammersmith and City line and the Circle line.

Cyclists, meanwhile, will be able to use a superhighway route from Hounslow High Street along King Street and Hammersmith Road to Hyde Park Corner when it opens in 2016.

It is easy to see why prices for prime properties in the area increased by over 50% between 2009 and 2014 and are expected to increase by at least 20% again in the next few years. Despite being split by the Hammersmith flyover and the rest of the A4, both sides of this area of West London – where the average price of a flat is over £700,000 and semi-detached homes go for in the region of £2m – are popular.

Many property hunters new to the area start searching south of the A4 leading down to the river. Among Hammersmith’s most desirable addresses are Upper Mall and Lower Mall – two short stretches of pedestrianised riverside that are separated by Furnivall Gardens, a pretty riverside park.

Here and in the few surrounding roads some of London’s most sought-after Georgian property can be found. There are also some modern apartment blocks nearby, all within easy reach of traditional riverside pubs and lively rowing clubs, while it is hard to beat the terraced townhouses along Hammersmith Terrace for unobstructed views over the Thames.

North of the A4 and close to the centre of commercial activity in the area, Ravenscourt Park offers green open space surrounded by streets of well-restored Victorian properties, while Brackenbury village further east is an area of small Victorian terraces and cottages that acts as an overflow to Notting Hill and Kensington.

Some of the most desirable homes in Hammersmith are on roads leading off from the north of the station, such as Hammersmith Grove and Luxemburg Gardens, while popular developments of high-end flats include Sovereign Court and Distillery Wharf.

However, the lack of housing supply is acute in Hammersmith due to the dominance of period properties and conservation zones that restrict potential development. As a result, new schemes tend to sell extremely quickly.

This has certainly been the case with Sovereign Court – a recent development in King Street, where a multistorey car park in the heart of Hammersmith’s retail centre has been transformed into 418 homes plus offices, shops and restaurants.

Of the older residential properties in Hammersmith, the grand, stucco-fronted houses dating back to the 1820s, alongside an imposing domed church and listed public gardens in St Peter’s Square, are among the area’s most coveted properties.

St Paul’s Girls’ School in Brook Green, one of the 2 best independent girls’ schools in Hammersmith

Latymer Upper School, on King Street, is a top-quality co-educational independent school that takes 11 to 18-year-olds.

In the state sector, the Borough of Hammersmith and Fulham has 17 secondary schools, including the excellent London Oratory School.

There are also 17 independent primary schools in Hammersmith and Fulham, including Bute House for girls and prep schools St Paul’s Girls’ School and Latymer Upper School. In the state sector there is a choice of 37 primary schools, including the outstanding John Betts School in Brackenbury Village and St Peter’s CofE School.

Day and night in Hammersmith

Hammersmith is well served when it comes to retail opportunities. The main shopping areas are the Broadway Mall,King Street and King’s Mall, which contains a large Sainsbury’s. Other supermarkets in the area include a Tesco Metro, Sainsbury’s Local and M&S Simply Food.

Brackenbury Road is home to a range of independent stores, while the Hammersmith Farmers’ Market takes place every Thursday in Lyric Square.

After dark, King Street contains a wide range of pubs and restaurants all the way down to Chiswick High Road, also a busy restaurant centre.

Or why not head down to the world-class River Café, where Jamie Oliver shot to fame, on the banks of the Thames?

When it comes to live entertainment, Hammersmith is hard to beat. While the Hammersmith Palais may now be a footnote in musical history kept alive by The Clash, the Lyric Theatre, the Hammersmith Apollo the Riverside Studios performance space and cinema complex continue to draw audiences from all over London and beyond.

On a more local level, Time Out says the Polish Theatre on King Street does justice to the area’s significant Eastern European community.

Hammersmith Bridge
Another beloved Hammersmith landmark is the bridge over the Thames. Opened in 1887 by the Prince of Wales, it is the lowest bridge across the Thames in London with a clearance of only 12ft at high tide. The bridge, which was designed by Sir Joseph Bazalgette, has long been a favoured viewing point for the Oxford-Cambridge University Boat Race. After a bomb attack in 2000, the river crossing was restored in its original green and gold colour scheme and is now a Grade II-listed structure.

Green space in Hammersmith
Ravenscourt Park has tennis courts, a basketball court, a bowling lawn, a paddling pool and playgrounds, while Furnivall Gardens is also a popular riverside park.

Business in Hammersmith
Hammersmith has one of the lowest office vacancy rates in London at around 2% and has managed to attract some impressive names over the years, including L’Oreal, Disney, AOL UK and architects Rogers StirkHarbour & Partners.

Historic pubs in Hammersmith
The Dove in Hammersmith is one of London’s oldest surviving riverside pubs, which lays claim to the smallest bar in the world and was once frequented by Ernest Hemingway and Graham Greene.

Not only that, in 1740 poet James Thomson wrote the words to patriotic songRule, Britannia!at The Dove.

A memorial bench dedicated to actor RikMayall can be found on the traffic island outside Hammersmith Broadway. It was installed following a social media campaign in November 2014.

Mayall starred alongside Ade Edmonson in BBC sitcom Bottom and the duo could be seen in its opening credits sitting on a similar bench in the same location. 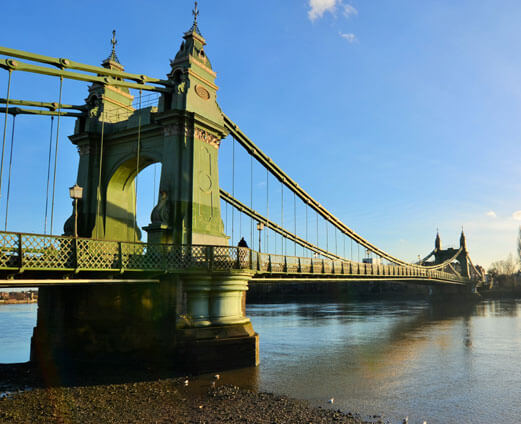 Our pick of the best

As a sales and lettings agent in Hammersmith, here at Lawsons and Daughters we pride ourselves on being able to find our clients whatever property they’re looking for. From Victorian and Georgian homes to conversions/mansion flats or new apartments, we’ve got it all on our books. Make sure you contact us, the number one Hammersmith estate agents – our friendly team are waiting to hear from you.

As your local go-to experts, we thought to give you our favourite reasons for living in Hammersmith. These include: